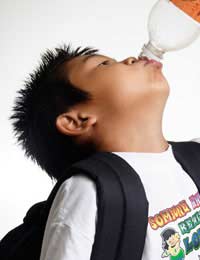 The playground was buzzing with the news- Liam was actually going to do it! The crowd of youngsters gathered around the daredevil who held in one hand a bag of Pop Rocks, and in the other a can of soda. To the chants of “DO-IT, DO-IT” he tossed back the packet of candy and then began to chug the soda. After polishing off the drink, Liam looked around at a crowd of suddenly silent faces. Would his stomach pop? Would he literally explode from the supposedly lethal combination? Such were the questions surrounding the Soda and Pop Rocks Urban Legend.

Many a youngster has enjoyed a packet of the popular Pop Rocks candy. These delightful confections were invented before 1960, but did not hit the open market until 1975. Pop Rocks are fruit flavored candy nuggets that contain carbonation. When the candy hits the tongue it releases the carbonation, causing a sizzling noise and a popping sensation that many enjoy, although some find it unsettling. The parents of kids in 1975 found it very unsettling, and in Seattle the Food and Drug Administration set up a hot line so that concerned parents could phone in and be consoled that the candy was safe.

Then the rumors started. Mix soda and Pop Rocks and you have more carbonation that then human body is meant to sustain, producing powerful belches. Mix too much, and the gas build up comes on too fast, causing the stomach to explode, resulting in a horrible death. Which, of course, is completely untrue. The gas produced in a bag of Pop Rocks is about the same as a half can of soda; therefore drinking a can of soda whilst consuming a bag of the candy is the same net effect as drinking a can and a half of soda.

The Origin of Soda and Pop Rocks Urban Legend

Who first came up with the idea that the two sweets combined can kill is unknown, but the fact that the urban legend cropped up at all is hardly surprising. The candy was unique in its day, and the sizzling and popping that accompanied its consumption was juicy grist for the rumor mill. The key that really made this Urban Legend pop, however, was the inclusion of a famous victim- the actor that played Mikey in the famous “He’ll eat anything” Life Cereal commercials of the day. The fact that the actor “disappeared” shortly before the candy was taken off the shelves (which had nothing to do with the rumors) just made it all the easier to believe that the youngster died from internal combustion.

General Mills was the company that first brought Pop Rocks to market, and they may well have regretted doing so. The urban legend was so strong that the company was forced to spend profits from the candy fighting it, taking out full page ads in major publications and sending letters to school principals throughout America.