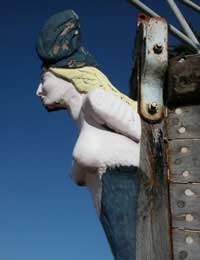 Sailors have a long tradition of superstition; looking for any edge they could find to give them comfort on stormy nights at sea. One of the longest standing superstitions – one that could also be classified as a bit of an urban myth – is that women on board a ship equalled bad luck.

Depending on the era and the nation, women were often forbidden from sailing on military vessels; as for merchant ships, that was up to the captain, or the company. Some say this is because women were considered bad luck, and that having a woman on board a ship when it was at sea would anger the sea gods, bringing on horrible weather and rough water. In some cases women who were on board ship were even tossed over board in order to attempt an appeasement of the gods.

Superstitions abound in all walks of life, but the sea faring folk seem to have more than their fair share. There are so many facets the ancient sailor’s life that he has no control over—the sea, the weather, market prices, politics, health – that he seemed to seize control over any aspect he could. Some believe this was out of a need to have some hope, some control over his fate.

Keeping women off of a working ship was one of those ways, and like many superstitions in the work place comes from a very sensible origin. The fact is while in some cases there were rules against women on board ship (not passenger ships, however) it was more often due to the distracter factor than any superstition. A woman on board a ship full of men on a months-long voyage could bring on all sorts of headaches for the captain, not to mention the woman.

While sailors would sometimes fight tooth and nail to keep women off of their ships, in many cases women were welcomed aboard. There are times when a wife would sail alongside her husband, and there is a reason that literature has examples of women disguising themselves as men to sail – it has a historical basis.

The most ironic twist to the “women on ship are bad luck” superstition was the flip side of the coin, a superstition that had women being good luck in connection with the ship. Women, despite in most cases not being allowed on board a working ship as crew, were sometimes considered better navigators than men. Put this together with the power of a bare chested woman to “shame nature” and keep the waves away, and you have the reason behind the popularity of topless women depicted as figureheads on many sailing ships.

Figureheads, or mastheads, are carved statues fixed to the prow of the ship, and sometimes are depicted as ancient creatures or warriors, but a very popular choice was a bare woman pointing the way to port.

The superstition of women being bad luck on board ship is wide spread, or at least, the awareness that the superstition exists. The reality that women were never allowed on board a merchant ship, however, falls more into the urban legend category.
Next Page

The Myths And Truth About Mirrors
Share Your Story, Join the Discussion or Seek Advice..
[Add a Comment]
I'm 99% sure that the figurehead in the image at the top of this page is mine. It was attached to our 1930 wooden schooner but it was not original to the boat. I am interested in tracing the history of it to see who made it and if it was a one off or if there were more but have no idea where to start. Can anyone offer any pointers?
Alex - 21-Jun-20 @ 9:32 AM
being thrown to the bottom of the rescue queue to die, to fit the women on rescuing them dinghies first.. yeah totally no reason.. and titanic is totally not a horror movie, but a romantic movie..
6 - 28-Dec-18 @ 11:44 PM
I'm working on a story, and I was wondering when did this Superstition stop being believed?
Traffy - 14-Dec-16 @ 4:38 PM
@Hinksy - because there are none. These are superstitions and the only basis they were formed from was oral heresay. People were encouraged to live a life of fear, and so much was based on 'luck'. We think differently now and that is why most of these superstitions are ignored. A black cat crosses your path, a bird flies into your house, a mirror breaks, it doesn't matter. It just means that a bird got lost, a black cat was on its way somewhere and you dropped the mirror by accident. We don't think that something is actually going to happen because of it! Jen
JollyJen - 4-Nov-16 @ 1:50 PM
I've read about 30 sources on this topic and nobody has any facts to support any stories about bad luck or good luck. I'm finding more and more information on the last 300 years to be false.In the absence of decent references, I have no confidence in anything I read these days.
Hinksy - 3-Nov-16 @ 6:26 PM
This is fine, but all too often a blind eye was turned and women would be allowed on board for long journeys - and not only on passenger ships. Also, when a ship reached harbour, all too often the first vessels out to greet them would contain prostitutes, who were - perhaps unsurprisingly - immediately welcomed on board.
rob - 17-Sep-12 @ 2:39 PM
I wonder when this superstition was founded and when it died out?I suggest it might well be that the distraction of women on board a ship was so distracting that the Admirals, Captains etc spread this myth to justify them not being on board.At the end of the day females can be a distraction of sorts.I used to work at a company who wouldn't employ attractive women as they were a distraction.Maybe they should have started a myth that women were bad for the network or something!!
SailingMyth - 16-May-12 @ 6:02 PM
Title:
(never shown)
Firstname:
(never shown)
Surname:
(never shown)
Email:
(never shown)
Nickname:
(shown)
Comment:
Validate: