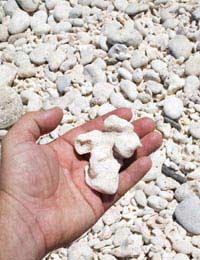 With little else to do during the dull hours of the shift the desk clerk at one of Hawaii’s most prestigious hotels decided to go through the day’s mail. Addressed to the hotel itself were plenty of letters and bills, but one item caught the clerk’s eye. A smallish package wrapped in plain brown paper, which provided tough to open, revealed in it a lump of volcanic rock and a note. Scrawled on the note in a shake hand were the words; “I am returning this rock to the Island. I’m sorry I took it. Please forgive me.” As unusual as such a situation is, to the desk clerk it can be added to the mountain of similar packages, each containing missives seeking an end to the bad luck that comes from stealing rocks from Hawaii.

The Stealing Rocks from Hawaii Superstition

Some people may not be aware of this superstition, but the managers and desk clerks in Hawaii can tell you how very real it is. The Hawaii Islands are truly a wonder to behold; the year round temperate climate, the crystal blue waters, and the lush rain forests provide fantastic backdrops to the visits to dreamy beaches and active volcanoes. Hawaii remains a top destination spot for vacationers year round, and these visitors want to bring a piece of paradise back home with them- sometimes literally. Taking a small volcanic rock home in jacket pocket may not seem like much of a big deal—until the curse settles in. Then people report all manner of bad luck striking them; the death of family pets, the loss of a job, a sudden illness- all of it and more are linked back to a belief that the act of taking a rock from Hawaii is bad mojo.

The Origin of the Stealing Rocks from Hawaii Superstition

The Hawaiian volcano god, Pele, is a jealous god, and is very protective of her children. Being a volcanic god, her kids are the rocks that come from molten magma cooling off, and she wants them to stick around. This is the legend behind the superstition, and the reason why people who believe it are willing to send rocks back to the Islands. They often include notes detailing their misery and asking for forgiveness from the island.

It is thought that the superstition and legend originated with the Hawaii rangers, those stalwart protectors of nature, who were sick of seeing tourists making off with the landscape. Sure a small bottle of sand from a beach is no big deal…unless a million people walk off with the same.

In one episode of the 70’s show The Brady Bunch the gang had visited a shrine to Pele and removed a rock- but in this case it was a min statue. Without even leaving the island they were plagued with bad luck, from a giant spider crawling in their suitcase to a near-death wipe out while surfing, the Brady Bunch had to return the idol in order to lift the curse and return home safely to the Mainland.

The Myths And Truth About Mirrors
Share Your Story, Join the Discussion or Seek Advice..
It seems that most superstitions are supported by the correlation equals causation assumption.My grandfather, the son of superstitious mountain people, told me it was bad luck to be superstitious. ??????????
Haristotle - 13-Nov-18 @ 3:46 AM
I've removed rocks from Maui without anything happening. Now that I live here however, I refuse to send any to anyone. I don't understand why I had this change of heart, but it's true. I did send one (and coincidence or not, the receiver did have bad luck!) so - no more. Why take chance, brah?
Emery - 14-Oct-13 @ 8:08 AM
Title:
(never shown)
Firstname:
(never shown)
Surname:
(never shown)
Email:
(never shown)
Nickname:
(shown)
Comment:
Validate: