Home > Superstitions > Walking Under a Ladder 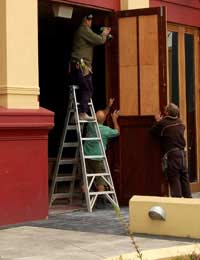 Running late for an appointment is a young man dressed in a sharp suit and carrying an attaché. Weaving through the foot traffic the man checks his watch to make sure he will make his important meeting. His phone rings and he retrieves it from a pocket and says hello. Distracted, he walks right under a ladder leaning on a building; realizing what he did he freezes, wondering if what his grandmother always told him is true- that walking under ladders means bad luck.

The Walking Under a Ladder Superstition

The Origin of the Walking Under a Ladder Superstition

There are a couple of theories about where the “Walking Under a Ladder is Bad Luck” superstition came from. The one mentioned above- that walking under a ladder was akin to blaspheming- comes from the early days of Christianity. Many Christians are believers in the Trinity—that God is made up of three parts, the Holy Father, the Holy Son, and the Holy Ghost (or Holy Spirit). Thus, the number three was somewhat sacred, and the triangle was by association also sacred with its three sides. A ladder leaning up against a building was seen as a triangle (the ladder itself making one side, the building wall making up a second side, and the ground connecting the two making the third side.) To walk through this triangle (by walking under the ladder) was seen as breaking the Trinity. The bible talks about the one unforgivable sin being blaspheming against the Holy Spirit, so someone who breaks the Trinity is seen to be in league with the Devil; and once again, being labeled such in the old days of Christianity was a quick way to invite the hangman and witch trials.

Another origin of the superstition was a bit less specific, and had to do withy the similarities between a ladder leaning against a wall and a gallows. Anything associated with a gallows was considered ill luck, so walking under one- or a ladder that looked like one- was not advisable. So what to do if you realize you’ve just walked under a ladder and want to ward off the bad luck? You spit. Either you spit three times through the rungs of the ladder, or you spit on your shoe. Make sure you don’t look at your shoe until the spit has dried, however. Failing these tactics, cross your fingers until you find a dog, or simply back out the way you came in and make a wish!

The Myths And Truth About Mirrors
Share Your Story, Join the Discussion or Seek Advice..
Fake because everyone does that and we don't have bad luck.
- - 27-May-20 @ 1:56 AM
The old superstition of walking under a ladder is told to be bad luck but There again to others it is just dangerous. Some people will go so far that they will just stop because of the old superstition of walking under a ladder
Pocket rocket - 21-Feb-16 @ 6:29 PM
i dont think that the last one relates to my reserch
courtcourt111 - 30-Aug-12 @ 3:45 PM
Title:
(never shown)
Firstname:
(never shown)
Surname:
(never shown)
Email:
(never shown)
Nickname:
(shown)
Comment:
Validate: