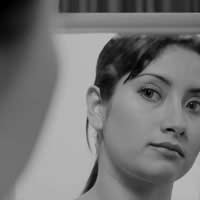 “Bloody Mary killed your wife.” Sort of an odd thing to say especially when standing in a bathroom with the lights out and staring in a mirror. Yet kids round the globe are doing it, or something similar, in an attempt to take part in an urban legend that would have a vengeful spirit appear and turn their hair white.

In 1978 an essay was published on this urban legend, which in turn is based on a much older bit of folk lore (which is what they used to call urban legends before there was an “urban”.) The legend has been around for hundreds of years and has a variety of sources for the infamous Bloody Mary, but the many similarities between them follow the same basic plot. A vengeful spirit – or in some cases just an evil, perhaps spiteful spirit—named Mary is the subject of the legend, and the target of the machinations required. The spirit, sometimes called a mirror witch, can be summoned by chanting before a mirror. The actual mechanisms for summoning her vary from place to place and story to story, but they often involve invoking her name and usually some sort of comment expressing belief in her.

In nearly every story the variables are what to say, and what happens after you say it, but the setting is almost always the same. A dark room with a mirror and privacy; apparently Bloody Mary doesn’t like crowds. One of the most common places to perform the ritual is in a darkened bathroom at sleepovers. Sleepovers because that’s when this ghost story comes out, and the bathroom because the victim…er, volunteer, can have seclusion while chanting. Phrases like “Bloody Mary killed your wife”, “Hell Mary”, or “I believe in Mary Worth”, or simply “Bloody Mary”. The last version is the scariest for both the person doing it and those waiting outside the bathroom door, for you must say it thirteen times, starting from a whisper, and then getting louder and louder until you are screaming the name.

After you perform the incantation something is supposed to happen. The spirit witch of Bloody Mary is supposed to appear in the reflection, and either scratch your face or suck your soul into the mirror (sort of an extreme set of options.) In some cases the devil is supposed to appear, although how he horned in on this legend is unclear.

The Origin of the Bloody Mary Urban Legend

There was a Bloody Mary in history: Queen Mary I of England. She has her own myths, such as murdering young girls to bathe in their blood to preserve her youth. This is nonsense; she came by her name for killing Protestants in an attempt to return England to Catholicism. But the blood bath story is great for the Bloody Mary urban legend. Other Mary’s are women who died in car crashes or were murdered in their sleep, or witches who were burned at the stake. While the details often change, the general idea of the sleep over activity remain the same.

This urban legend was made into a film in 2005 appropriately titled “Urban Legends: Bloody Mary.” In the film the spirit of Bloody Mary is a teenage girl who dies at a high school in Utah in 1969, and then is summoned more than thirty years later by yet other teenage girls looking for thrills at a sleep over.

Soda and Pop Rocks
Share Your Story, Join the Discussion or Seek Advice..
@Pumpkinhead - they were told at a time when it was easy to frighten people and when people would believe in anything. For instance, witches were just fabrications based on fear-mongering. Just think of all those poor women that died innocently and who had never done anything wrong.
Milly - 2-Nov-17 @ 2:20 PM
I was told that you had to say her name three times. I don't believe in urban legends, myths, superstitions, and old wives tales. I believe that they are just stories that parents tell their children so they will listen. That's just my opinion, but others may believe them.
Pumpkinhead - 2-Nov-17 @ 1:41 AM
In my town in west virginia it is said that a girl (Mary) ran away to get married because her mother disapproved and as she waited for the train she cried she said her mother would be sorry for what she had said. When the train came she went to get on but it was the wrong train so she got off but her dress was stuck she tried to get it before the train started going but it ripped the train left and she fell in to the tracks and before she could stand it was to late she was hit and now she haunts the trails waiting for engaged girls. If she cant be happy no one else can either.......
lizzy - 6-Jan-15 @ 6:02 PM
Title:
(never shown)
Firstname:
(never shown)
Surname:
(never shown)
Email:
(never shown)
Nickname:
(shown)
Comment:
Validate: