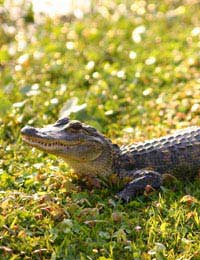 In New York City a tourist can find any manner of person or thing stocked as the city is with cultures as varied as they are different. As for a local, they can find what the tourists can only imagine, familiar as they are with the local twists and turns…but what about the fabled NYC sewer alligators? Is there any truth to this Urban Legend that has persisted since the 1930s?

The Alligators in Sewers Urban Legend

The tales of giant lizards thriving beneath the streets of perhaps the most famous city in the world have been told and retold, and are as persistent as alligators are intimidating. The stories typically follow the same track- New Yorkers visiting sunny Florida- well known for its population of gators, bring back to the city a souvenir in the form of a baby gator pet. Once the gator begins to grow, however, they see the error of their ways (perhaps fearing for the life of other family pets, or themselves) and flush the offending alligator down the toilet. This mini saurian winds up in the sewer system beneath the city, where it survives on rats, until it grows large enough to hunt something larger…

No one can argue that there are some pretty frightening things in New York City, especially in places that hide from the light of day and scrutiny of the throng, but alligators? Where did such a tale come from?

The Origin of the Alligators in Sewers Urban Legend

There are two likely sources for this urban legend. The first comes from actual alligator sightings in New York. According to the New York Times, stories of gators being found and hunted for began in the 1930s, with concerned citizens reporting on or bringing in a dead gator and the like. In most cases a little investigation turned up the facts, that these gators emerged not from the sewers, but escaped their owners. People likely did bring gators up from Florida as pets and, in some cases, may have even flushed them down the toilet. The odds of a baby gator surviving to the sewers is minimal, however, and there remains the fact that no reports of gators in the sewers have ever been made from official sources. There was, however, a book.

This would be the second likely source of the urban legend. In the book “World Beneath the City” author Robert Daily told the story of the then-head of the sewer system, Teddy May. According to the book May doubted the stories of alligator nests in the sewers, but was pushed to check it out for himself. May found a thriving colony after all of 2- foot long gators; the book then detailed the various methods of dispatching the lizards.

With Daily’s writing, one might be tempted to believe the tales, but a quick look at the facts would prove enlightening. Gators are cold blooded creatures that would not long survive a winter in New York; they are also not likely to survive in the bacteria baths that are the sewer systems. The biggest fact of all to consider? The sewer workers of NYC receive no “alligator hazard pay.”