Lightning And Your iPod 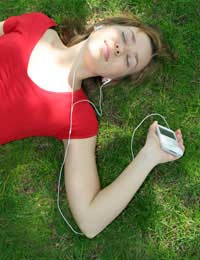 Out for a fun run on a sunny afternoon you are distressed to see clouds coming in low and fast. It seems a storm is brewing and, while you don’t relish the idea of getting a soak, it shouldn’t prevent you from finishing your run. Better put away your iPod, however, or you may be at risk as a target for a lighting strike.

Lighting strikes are a good source for urban legends, and the proliferation of personal electronic devices add a nice touch to the warnings. Being struck by lightning isn’t impossible, but it is unusual, and stories about increasing the chances are part of legend and wives tales the world over. Now that everyone seems to be plugged in to a music player or cell phone these days, it makes sense that an urban legend would crop up that says that they increase the risk of injury from a lighting strike. Except in this case, the urban legend is true.

The Origin of the Lightning iPod Urban Legend

This is a case of a story being circulated that sounds like a wives' tale or urban legend, but is in fact based on the truth. Being plugged in to a running MP3 player like the ubiquitous iPod can in fact ramp up the damage done by a lighting strike for any so unlucky to be the target.

It isn’t so hard to imagine if one considers that they are draped in metal wire when they have their iPod ear buds in. Take two people struck by lighting; one is not wearing anything metal, and the other has metal wire wrapped around his arm. Metal is going to conduct electricity, and a lighting strike is just that. Both persons are going to wind up with injuries, but the latter is going to have burns on his arm from the metal in addition to whatever other havoc the lighting causes to his system.

Stories are told of lighting finding targets inside buildings as well as outside, and it is effectively impossible to predict where lighting will strike. The best thing to do in the possibility of a lightning strike is to take as many precautions as one can.

Most people understand that touching metal isn’t the smartest thing to do when lighting is in the area, but fail to consider that they are doing just that—albeit through a “protective” plastic coating—when wearing headphones, iPod ear buds, or holding a cell phone. Reports of lighting damage have been made where people were burned in patterns mimicking where their headphone wires travelled up their body- even outside their clothing.

Electronic devices do not attract lightning, so that part of the urban legend is untrue. They will increase damage done to you if hit while wearing them, however. If caught out in a lighting storm with no where to hide, the best thing to do is stay low to the ground. Take off your headphones, toss aside your cell phone, and ditch your iPod. You may not relish the idea of your iPod and cell phone getting ruined, but better them then you.