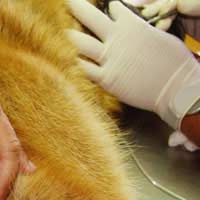 This urban legend has been around for a few decades but like many has received new life thanks to the internet and email. Now email boxes around the world are routinely hit with the tale of the dog in distress, the panicked trip to the vet’s office, the grisly discover, and a further surprise in the urban legend of the dog choking on human fingers.

Here is how it usually is told: A woman returns home from a shopping trip (or any other errand) to her home where she lives alone, except for her dog. The dog (always a big, threatening dog like a German Shepard or Doberman) is found to be in distress, choking on something that is making it difficult to breathe. The woman realizes she can’t help the dog and rushes it to the nearest animal hospital (or local vet office.) The vet can’t determine at first what the problem is, and recommends surgery to find out, and that the woman should return home to wait the results.

Upon returning home the woman finds the phone ringing; it’s the vet. He informs her that he has found human fingers blocking her pet’s airway, and tells her to call the police and get out of the house, fearing the person who belongs to the fingers is an intruder and may still be lurking about. The woman follows the recommendations, the police arrive, and a passed-out interloper is found in a closet- sans fingers.

The Origin of the Choking Dog Urban Legend

Despite the efforts of some, the exact origin of the story is unknown, as is whether or not there was a real life story that was the inspiration for this urban legend (as is often the case.) The story started to circulate enough to gain notice in the Eighties, although some cite earlier tales that are similar. Perhaps one creative storyteller came up with the tale and told it as true, and it was just interesting and shocking enough to be picked up and related over and over.

The question is, COULD it be true? While it certainly is possible, there are many factors that make the story unlikely as it is related. Vets and animal hospitals are in the business of caring for animals, and the vet in the story shows odd behaviour in that case. A dog choking on human fingers would have an obvious obstruction that a trained vet could find in a second, and surgery- if required- would not be done in such a casual manner. The owner would stay on hand rather than returning home, and be informed of the possibility of an intruder fairly quickly.

Elements of the story change from telling to telling, such as the location of the woman, where the intruder is found, who finds him, and the breed of the dog. Interestingly the breed of the dog changes also based on which dog is considered the most dangerous at the time. The initial telling moved away from German Shepard’s and Dobermans to pit bulls when those dogs became the terror of the media.