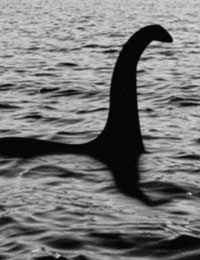 In 1934 a grainy black and white photograph gave the world the first apparent proof that the age old legend of a monstrous creature inhabiting Scotland’s Loch Ness was indeed real. The swan-like neck the head reminiscent of a water dinosaur, the hump suggesting a long, powerful body; how could it not be the fabled Loch Ness Monster?

Among the legendary creatures of the world there are a few that stand out and are considered well known regardless of where in the world the tale is told. One of the most endearing—and enduring—is the myth of Nessie, the affectionate nickname of what is better known as the Loch Ness Monster. Said to inhabit Great Britain’s largest freshwater lake, Scotland’s Loch Ness, Nessie has been the subject of a great deal of speculation and scrutiny over the years. While it may seem a fairly modern myth, some references to an unusual creature have been made in writings as early the 7th Century. Sightings are reported by locals, scientists, tourists, and monster hunters, all of whom hope to be the one to provide conclusive proof that the famous Loch Ness Monster is as real as the loch itself.

The Origin of the Loch Ness Monster Myth

That first mention of a monster in the loch came by 7th century writer Adamnan, who was recounting the adventures of Saint Columbia in the year 565. While critics point out that the “Life of St. Columbia” depicts the holy man as something of a monster slayer and use that to discount the reference to the loch monster, it does remain as some proof that the legends of Nessie began long before the “evidence” began to surface.

While tales of water monsters are not unique to Scotland—which in fact has reports of other loch monsters such as “Morag” from Loch Morar—it seemed that Loch Ness had more than its fair share of reported sightings. Naturally many are simple hoaxes, people having a bit of fun and coming along with a popular fantasy. Others are more serious on the part of the reporters, people who claim to have seen either bits and pieces of the monster (a head and neck rising swan-like from the loch, seen at a great distance) or something more fantastic (a couple claiming a creature described much like a dinosaur crossing the road in front of their car before disappearing into the loch). Evidence of the photographic kind began to appear as the technology to support it came along, the most famous of which is the “Surgeon’s Photograph”, taken by Dr. Robert Kenneth Wilson.

This photo, taken in 1934, is often shown cropped down to isolate the image of a head, neck and hump of a back in the water. The effect makes the creature imaged seem much larger than it actually is. Wilson, who never claimed it to be a photo of Nessie but rather “something” he saw in the loch, remained stoic in the face of accusations that it was a fake. Analysis of the ripples in the photo resulted in experts claiming that the “creature” was very small indeed. In the end Wilson admitted, decades later, that it was indeed a fake, so to speak. The “creature” in the photograph was a toy submarine with a crafted head and neck attached.

Theories have been floated to support sightings in Loch Ness from gassy submerged logs to boat wakes to an actual dinosaur surviving the march of time. In the end, it hardly matters if no evidence to prove the Loch Ness Monster is real ever surfaces, because the legend of Nessie is real enough.