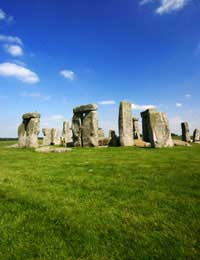 Most people know Stonehenge as the man made ring of ancient stones in England and attribute to it some association with the ancient Druidic and pagan people of that land. What they may not know are the various legends ascribed to the stone ring legends that link its construction to Ireland and even Africa, not to mention wizards and giants.

While Stonehenge itself is clearly not a myth, there are myths that surround the origins of the stone ring, especially concerning how, exactly, ancient man was able to lift and move individual stones weighing 50 tons apiece.

Stonehenge is not simply a circle of standing stones, although that is certainly what is the most apparent. The stones stand in a ditch carved out around 3,000 BC, and as the stones themselves (or at least their placement) date to around 2,200 BC, the construction of Stonehenge was not an overnight accomplishment. This is one factor that many legends do not take into account, as they ascribe the erection of the stones to magic or as the work of massive giants, things that one would assume would not take thousands of years.

One myth suggests that King Arthur was responsible for the creation of the stone circle, harnessing the power of 15,000 knights and one wizard to do so. The stones were in Ireland, and obtaining them necessitated the killing of 7,000 Irish, who didn’t want to give up their stones. All the king’s men couldn’t move the stones, however, but Merlin managed to magic them to their resting place in Wiltshire.

And how did the rocks end up in Ireland? According to Geoffrey of Monmouth, the author to first put Arthurian Legend to narration, they were moved from Africa to Ireland by giants, brought to the Emerald Isle because of special healing properties. Geoffrey was known to inject a good deal of his own imagination into his “historical” writings.

The Origin of the Stonehenge Myth

The presence of such a monumental stone circle in the countryside dating back as far as living memory, and for generations, practically demands a myth. With no express explanation in written history for their presence, and thanks to the obvious purpose with which they were placed, Stonehenge was bound to be a place of mystery and legend. The sheer massiveness of each stone demands an explanation that is not forthcoming, and so the myths came about to fill the void.

Today the Stonehenge circle and earthworks are associated with—and used by—many groups claiming there is a magical or spiritual significance there, a power that can be tapped into and harnessed. Historians try to point out, often in vain, that the Druids who may have used Stonehenge in antiquity have very little in common with those that claim that connection today.

The Stonehenge myths and legends are in danger of being permanently affected by modern day tourism. Around the turn of the last century many of the stones had fallen or were leaning precariously. A great undertaking restored the monuments, but now a fight is on to move two major roadways that pass right by the ancient site, without damaging it in the process.

The Holy Grail
Share Your Story, Join the Discussion or Seek Advice..
As a little girl,I always loved the 'Standing Stones' They were so magic seeming, and every year when me and my family drove down to Cornwall on holiday, we always saw them. My own kids love it too...
CatLady - 7-Aug-19 @ 7:01 PM
Title:
(never shown)
Firstname:
(never shown)
Surname:
(never shown)
Email:
(never shown)
Nickname:
(shown)
Comment:
Validate: