Home > Myths > The Myths and Legends at Glastonbury 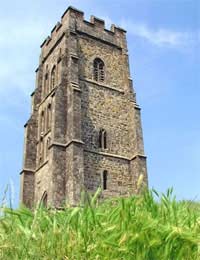 There are many Myths and Legends at Glastonbury, two of which deal with Bible stories - one directly and one indirectly. Glastonbury’s tales are often told singularly, as if each telling were the one and only myth of the land, but when taken together they form many connections, like the varied twigs and branches of one great, ancient tree.

The Arthurian legends stretch out across many lands, but in Glastonbury there seems to be a nexus of sorts. Indeed many believe that this is where fabled Camelot once existed, the backdrop of the famous Knights of the Round Table, Merlin the wizard and the tragic and heroic figure of Arthur himself.

In nearby South Cadbury there is a hill fort, a possible ancient remnant of Camelot proper. There is proof that the hill fort dates back to the early 6th century -- and this is when many believe the time of Camelot was.

There are more physical hints to possible legendary connections between Glastonbury and famed Camelot. The enchanting hill that rises above the lands of Glastonbury -- known as the Glastonbury Tor -- is believed by some to be the mythical Isle of Avalon. At first blush it seems like a silly link; after all, shouldn’t an Isle be surrounded by water? But upon further examination it isn’t as silly as it sounds.

In the 6th century the water levels of the region were much higher, which could very well have turned the Tor into an Isle; an Isle often referred to the “Island of Glass” - a possible etymological connection to the word “Glastonbury?”

Indeed the very structures of the land are often linked to Arthurian legend. One such myth suggests that the varying architecture was laid out in conjunction with the landscape to provide a sort of celestial zodiac calendar with Arthurian imagery. Also at the Glastonbury Abby monks claimed in the 12th century to have found a stone marked “Here likes Arthur, king” and under it a man and woman’s skeletons - the bones of Arthur and his wife, Queen Guinevere?

The Holy Grail features prominently in Arthurian legend, which links to another set of myths around a biblical figure - Joseph of Arimathea. Believed to be Jesus’ uncle, this Joseph was supposedly the bearer of the grail from the Holy Land - along with, according to legend - the body of the Messiah.

The grail was supposed to contain a few drops of Jesus’ blood, and legend has it that Joseph buried it at the foot of the Glastonbury Tor, from which sprang a spring of blood. To this day there is the Chalice Well, where the water often has a reddish cast.

Also it was said that when Joseph of Arimathea arrived in Glastonbury he stuck his thorn staff into the ground and it turned into a thorn tree and blossomed. A cutting was taken from that tree and planted in the Glastonbury Abby, where to this day a thorn tree from Palestine blossoms every Christmas.

Stonehenge
Share Your Story, Join the Discussion or Seek Advice..
the first church was built on ictis by Joseph of Arimathea in38ad the second was at Brentor Dartmoor in 47ad the third was Glastonbury in 67ad all these site are dedicated to St Michaels Chaples .King Edward Elgar the second in 907swapped the twelve hides in summerset for one hide called the priory of plympton and its islands were ictis Avalon is surrounded by ten islands if you put a straight line from Brentor chaple it lines up with the chaple on my island which was known as St Michaels by the sea . ictis holds the truth to the holy grail and is the final resting place of Joseph on the river Tamer under makers view ictis is modern day ?...read my theory it's called Ictis closer than you think it's on Amazon uk I'm not crazy as the top archeology expert sir Windsor barrington cunliff said in 1988 ictis was mount battten that's the other island mine has a causeway to Cornwall and an entrance to a sub tarianian cavern system going to it and has a marble and limestone vault on top of a costal tor it's now called Nazareth house run by nuns it was a Celtic monks monastery until Henry the 8 destroyed the monks they went over to St Michaels France were the Grail story began and Arthur was Cornish and the river camel is at camels head (Camelot )means cobolous. A Celtic diety read my theory.
Oracle - 14-Aug-15 @ 5:41 PM
Title:
(never shown)
Firstname:
(never shown)
Surname:
(never shown)
Email:
(never shown)
Nickname:
(shown)
Comment:
Validate: