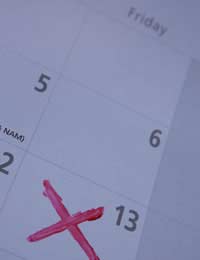 Standing in the lift waiting for your stop you idly follow the progression of floors as they tick by in the display window near the door. Heading for the top of the office complex, you know you are in for a bit of a wait as you watch the numbers slowly flick from single to double digits. Ten…eleven…twelve…fourteen…wait, fourteen? What happened to thirteen? It appears that the building’s management were out to serve the interests of those who suffer from Triskaidekaphobia, or fear of the number 13.

Many people and many cultures have a fear of the number 13. The official term of this fear, Triskaidekaphobia, comes from the Greek words for fear and for thirteen, but the fear did not originate with the Greeks. The fear of the number thirteen is said to have a number of different sources, some which are attributed to Christian beliefs, and some to old counting methods. Many of the Christian beliefs are linked to the Last Supper, where Jesus is said to have sat in the 13th seat, and thus the number carries with it a curse. Others say that Judas was the 13th guest, or that Lucifer was the 13th angel. This last concept could have come from an old Norse belief that Loki was the 13th god, and when he showed up at Baldur’s funeral (despite being Baldur’s killer) he was the 13th guest.

To this day sufferers from Triskaidekaphobia will refuse to be the 13th guest at any gathering, as they believe it means they are destined to die in a year. While the origins of the number 13 superstitions are lost in the mists of time, the fears are very real, leading some businesses to respond in a very real way. Many hotels, for example, will leave the number 13 off the lift options, making the 13th floor the 14th floor. Suffers from Triskaidekaphobia seem happy enough with this logic, ignoring the fact that the “14th” floor is still the 13th, just masquerading under another name.

While the fear of the number 13 and its superstitions seem to be found in any country, the fear of Friday the 13th is specific to certain cultures…although there are a lot of them. Nations where the languages are English, German, Portuguese, Polish or French have cases of a fear that Friday the 13th is an unlucky day; once again the origins of such a superstition can not be specifically pinned down, but are open to speculation.

There have always been cases of fear of the number 13, and feelings that Friday is an unlucky day, but putting them both together as one fear did not occur—at least no written record can be found- before around 1880 in an accounting of someone being unlucky to have died on that day. The fear of Friday being an unlucky day is often linked to the belief that the day of the week that Jesus was crucified on was a Friday, yet that day is honored in many a Christian church as “Good Friday.”