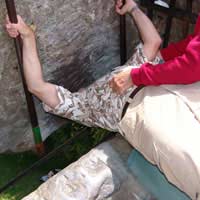 The King of Munster was a hero- at least to one old woman. The story goes he rescued her from drowning in a raging river and in return the woman cast a spell to give him a gift of speech so powerful he could win allies to his cause. The catch- for some reason- was that he had to climb to the top of Blarney castle and kiss a particular stone for the spell to take affect.

Unlike many of the wives tales and urban legends and myths one hears, the kissing of the Blarney Stone is also a tradition, one that is actively pursued despite risk of life and limb. In fact, there is one reported death from following this tradition, so what is it about the kissing of the Blarney Stone that would drive people to take such chances? It is, simply, the hope in acquiring the Gift of Gab.

To kiss the Blarney Stone is said to bring about a charm on the kisser, to bestow upon them a silver tongue with which to spin tales and songs to mesmerize others. What makes this wives tale even more interesting is the fact that there IS an actual Blarney Stone, sitting atop Blarney castle, near the town of Blarney in Cork, Ireland. The stone is officially called the “Stone of Eloquence”, referring to the supernatural gift of tongues so many seek by kissing the stone.To kiss the stone requires visitors to suspend themselves over an open chasm upside down- a feat that resulted in one death when the youth attempting it lost his grip and fell to the roadside below. Now kissing the Blarney Stone is more of a team effort. The kisser lays down and lowers his body backwards into the chasm whilst holding a support bar, and a friend sits on his legs to keep him anchored firmly to the floor.

The Origin of the Kissing the Blarney Stone Wives Tale

There are two origins of the Blarney tale. The first, as mentioned above, is a bit of old witchcraft or fairy magic involving the King of Munster. No actual time frame is associated with this tale, but the word Blarney and its meaning—beyond that of the physical location—can be pinpointed.

During the reign of Queen Elizabeth the first, the ruler of the Blarney fortress was required to surrender it as a test of loyalty. Dermott McCarthy was his name, and making excuses was his game. Each time he appeared in court he made the promises anew, but never delivered on the surrender. Finally the Queen was so frustrated that she exclaimed in the face of his most recent story that she was done with “Blarney talk”. From this the word Blarney has come to mean fancy talk that holds little meaning.

Storytelling is an intregal and important part of the Irish culture, and a singing voice or story teller’s gift is highly praised and sought after. The fact that one of those stories is about magically gaining such eloquence makes for a perfectly Irish wives tale.

Use a Match to Remove a Tick
Share Your Story, Join the Discussion or Seek Advice..
A magpie has flown in the door of our conservatory twice within a week. There are many magpies around our house which is beside the sea. It kept flying into the glass and pecking at it. Using a newspaper I gently helped the magpies get back out. Although they were frightened they flew away unhurt. My husband and son were in the house but I dealt with birds myself. I have lived here for over nine years and nothing like this has happened before. In the same week a bird flew into an upstairs window but I don't know what kind of bird it was. I have heard of the superstitions regarding magpies flying into houses and feel uncomfortable about this. Does it foretell my death or the death of my son or husband. It it had happened once I would have ignored it but twice in the same week is creepy!
Nica - 21-Sep-12 @ 9:33 PM
Title:
(never shown)
Firstname:
(never shown)
Surname:
(never shown)
Email:
(never shown)
Nickname:
(shown)
Comment:
Validate: