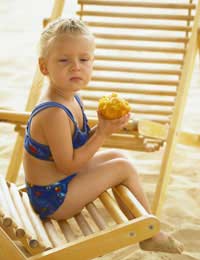 Summer time at the beach lake or swimming pool is a magical time for children, but come lunch time a certain anxiety starts to set in. All the swimming surely builds up an appetite, but every kind knows- thanks to the warnings of their mothers- that if they eat, they are out of the water for exactly one hour. If they don’t wait, they will get stomach cramps and drown, so there is no debate on the topic—yet it turns out these kids are needlessly being denied an hour of fun thanks to an old wives tale.

The Waiting After Eating Before Going Swimming Wives Tale

There isn’t a clear origin to this particular wives tale, but it has been persistent for years, going back to the 1950’s and beyond. The idea here is that a child—or anyone, for that matter—that goes swimming after eating risks their very life, thanks to the inevitable stomach cramps that come along with the activity. Yet the very lack of those stomach cramps among those who disobey the “rule” about waiting to go swimming after they eat calls foul on the concept. Those stalwart mothers intent on protecting their young from the evils of digestion gone wrong, however, just say those who avoided the cramps were just lucky, and they will “get theirs” if they keep on breaking the rules. Of course there are those mothers who wonder, while suffering the puppy dog eyes of their young, if they are being silly.

While the belief is prevalent in many countries and in many cultures, there has never been a drowning reported that could be linked to stomach cramps brought on by entering the water too soon after eating. One would think that an idea so prevalent to be followed by thousands upon thousands of mothers the world over would be based on some hard facts, some proofs, or is the lack of reported deaths precisely because so many mothers insist on keeping their kids dry while digesting their midday meal?

Cramps can Kill – Can’t They?

It certainly is possible to have muscle cramps through strenuous exercise, and it is not recommended to over exert oneself directly after eating a big meal, but regular splashing about isn’t likely to bring on the cramps. Should a charley horse strike, the victim can float just fine while they work it out. In fact in most cases (like in the shallow end of a swimming pool) they can just stand up and walk to the side while they massage the cramp out their limbs. These kinds of cramps are not uncommon among swimmers pushing themselves, but they are not the dreaded—almost mystical—stomach cramps the wives tale warns against.

In some countries, such as Cuba, the waiting time can be as much as three hours for those that ascribe to this particular belief. While the time may be different, from a few minutes to the full sixty or more, the wives tale of murderous stomach cramps brought on by premature swimming after a meal is likely to be around for many years to come.

Use a Match to Remove a Tick