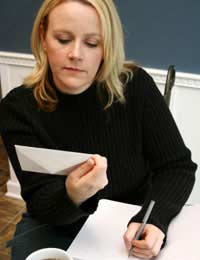 “Do you need a little luck? Who doesn’t? Today is your lucky day! Copy this letter word for word, and send it on to ten people you know, and you will experience life changing luck within 48 hours! It works, trust me!” So reads a typical chain letter, one of the few superstition based schemes that worked so well that- when it comes to money- it is deemed illegal in many countries.

Here is how it works- you open a letter and find a promise, and often a threat in one neat package. This letter promises you love, money, luck, friendship, and asks you to do one simple thing- pass it on. If you don’t, however, you will wind up with the opposite of what you seek. Bad luck will befall you, because you dared to break the chain. Such is the typical chain letter, something that has ranges from an annoyance to an outright scam in some cases.

The most common chain letter is one that claims good luck follows those who follow the chain. In most cases bad luck will befall those who break the chain- this is sometimes only hinted at, sometimes spelled out in plain language. Sometimes “luck” is substituted with “prayer” or “blessings”, but the basic formula remains the same. The author of the letter relates how they received their copy, followed the rules, and was blessed with good fortune of one stripe or another. This same person knows some else who did not follow the instructions, broke the chain, and was visited with misfortune.

Another very common type is the pyramid scheme letter. The same concept applies- that good will come to the recipient of this letter if they simply follow instructions- but this time that good fortune is in the form of an actual fortune. The most common form of these money pyramid scheme letters works like this; there is a list of five names, and you are supposed to send money to the person at the top, then copy the list, removing the top person, and add your name at the bottom. The idea is that by the time your name reaches the top the number of people in the chain will have increased exponentially and the money you sent out will be returned to you many fold.

If that sounds a little fishy, you are not alone. In many cases sending a request for money that is supposed to result in great rewards is strictly illegal, and for good reason. There are a host of reasons why such a scheme would not work, starting with the uncertain honesty of the people who receive your letter. If they substitute their name for the top name and send it on, your name doesn’t move on the list—this could go on indefinitely, and you never receive your promised windfall.

Chain mails have moved on to the virtual realm in the form of emails. The speed and ease one can now send on chain mail is staggering, simply by a few clicks in their email client. Fortunately many of these are relatively harmless, but a word to the wise- there is no way that sending on an email to “x people in your contact list” can make an image or video appear on your screen.