Home > Gods & Godesses > Zeroing in on Zeus, Father of the Greek Gods

Zeroing in on Zeus, Father of the Greek Gods 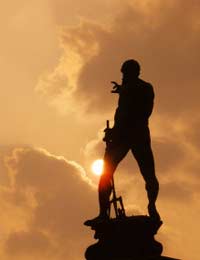 Like many gods in many Pantheons, the Greek Father of the gods, Zeus, had many aspects of life -- both those readily understood and those clouded in mystery -- attributed to him and his sphere of influence. Partially as a way of explaining this, partially as a way of honoring the head of Greek mythology, and partially serving as descriptions of the various roles of Zeus, Greek culture assigned a number of different titles to the head of Olympus.

The Names of Zeus

Zeus Olympios, linking the Zeus with Olympus itself, highlighted his role as ruler of the gods. Zeus Panhellenios was specifically linked to the Panhellenic festival at Olympia, while Zeus Xenios referenced his role as the patron god of travelers and guests, emphasizing the importance that the Greeks themselves put on the safety of such people. Those who made a habit of lying would run afoul of Zeus Horkios, which is the title of the Zeus, the honest. Link to that would be Zeus as the patron god of businessmen; Zeus Agoraios.

Among all the gods and goddesses of Greek mythology to Zeus is paramount. Not only was he the leader of the 12 Olympians, he figured into countless stories of interactions with not only other figures out of Greek myth, but with the Greeks themselves.

The Appetites of Zeus

In many ways Zeus was a representation of Greek religion and his appetites, while prodigious, were not in human. In fact a great deal of the legend of the Greek god of the sky centres around the number of children he fathered, and the number of women -- both mortal and divine -- upon whom he did the fathering.

Zeus would seduce mortal women, sometimes taking on different forms such as a Swan in order to do so. The children from these unions, and those with Greek goddesses such as Hera (the Goddess most commonly considered to be the wife of Zeus) typically resulted in the birth of either a new Greek god or goddess or a hero. The most famous hero from such a union, coming from the dalliance of Zeus with the mortal woman Alcmene, was the legendary Hercules, one of more than 40 half brothers and sisters born from similar trysts.

According to legend's Zeus narrowly avoided an early grave. His father was the Titan Kronos, who had the nasty habit of devouring his own children. The Zeus's mother, Rhea, managed to hide the young godling who was then raised by -- depending on which legend you subscribe to -- a goat, Shepherd family, another goddess, or the nymph. When Zeus reached maturity he fought close and made him come up his siblings.

Zeus in Other Religions

The legend of Zeus reached out across many different mythologies, not just the Greeks. Interestingly, his counterpart in other Pantheon's was not necessarily the leader. In the Germanic and Norse, for example, he was closely linked with four not owed on the all father. But in the Roman tradition, with myths most like those of the Greeks, his counterpart was Jupiter.

Hercules, the Hero of the Greek Pantheon
Share Your Story, Join the Discussion or Seek Advice..
Such interesting reading! I suddenly got the urge to know more about the Greek gods after watching Wrath of the Gods.Thank you for putting up such an informative site. I'll be visiting it again soon, there's so much info I would still like to find out about.
Anette - 10-Apr-12 @ 7:21 AM
Title:
(never shown)
Firstname:
(never shown)
Surname:
(never shown)
Email:
(never shown)
Nickname:
(shown)
Comment:
Validate: