Home > Gods & Godesses > Take up Arms with Ares, the Greek God of War

Take up Arms with Ares, the Greek God of War 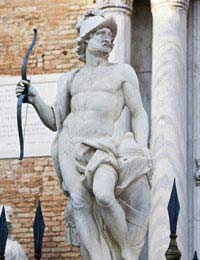 Ares was a Greek god that, it seemed, no one really wanted around (expect for Aphrodite.) While commonly called the God of War, Ares was more accurately the god of "war -madness", bloodlust, and slaughter. Expcept for a few instances Ares is not very prevelant in Greek mythology, but when the bronze armored god did show up, he certainly made his presence known, often in a big way.

Ares was the child of Zeus and Hera, and knowing the rocky relationship the King and Queen of the Greek gods had it might make Ares twisted passions a bit more understandable. Ares was not the god you called on when you needed help with the strategic side of war - that would be his half sister Athena. Ares was the god you called on to drive your side to a fever pitch of frenzy in battle; more of a personal victory help than to help the winner in a war.

The Spartans were the Greeks most likely to appeal to Ares before battle, and they had a temple to the god. While not the "go to god" of most in Greek Mythology, Ares does have a number of interesting legends surrounding him, especially when concerning Aphrodite.

The Greek goddess of love was, at the time, involved with another at Mt. Olympus when she and Ares had their fling; thus the two tried to keep their dalliances secret. One legend says that, one night when the two met, Ares assigned a youth, Alectryon, to stand guard at the door and warn Ares if Helios (the Greek personification of the Sun) came near, as Helios would spread the tale. Alectryon fell asleep and Helios caught the two lovers. As punishment Ares had Alectryon turned into a rooster, and to this day roosters never fail to warn of the coming of the Sun.

So what happened when the two got caught? Helios caught them in a net and then invited the rest of the gods to come and see. The goddesses showed some class and declined, but the male gods hurried over. They had a number of different reactions, but all soundly taunted the pair, causing Ares to flee when set free.

Ares and his Companions

For a god that didn't show up very often in myth, Ares had quite a large retinue. While some of his companions described in legend were logical relationships, such as his sister Hebe and his son Enyo, others seemed to come strictly from his role as the personification of battle lust.

Terror and Fear were there with him in war, under the names Deimos and Phobos. The demon of the noise of battle, Kydoimos, as well as fellow demons of Battle, Makhai, and Manslaughter, Hysminai, and the personification of the Greek war cry itself, a female goddess known as Alala. Ares' son, Enjyo, had a name that means war-like, and sometimes Ares was called Enjyo.

Ares found more respect from his transplanted self. To the Romans Ares was Mars, and his role was more like a combination of Ares and Athena; the Romans held Mars in much higher regard than the Greeks held his progenitor Ares.

Hercules, the Hero of the Greek Pantheon
Share Your Story, Join the Discussion or Seek Advice..
It was cool and I learned things I didn't know
nicole - 16-May-12 @ 4:14 PM
That was an awesome brief summary. :) Can you post more about Ares about his postive characteristics.
Koolninja - 1-Feb-12 @ 5:03 PM
Title:
(never shown)
Firstname:
(never shown)
Surname:
(never shown)
Email:
(never shown)
Nickname:
(shown)
Comment:
Validate: