Home > Gods & Godesses > The Olympians, Gods and Goddesses of the Greek

The Olympians, Gods and Goddesses of the Greek 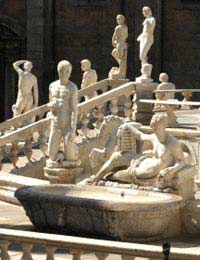 In Greek mythology there are different groups of gods and goddesses, but the one group that emerges as the most important in Greek myth is the Twelve Olympians. These principal gods, sometimes referred to as the Dodekatheon (which literally means twelve of the gods), included Zeus, Hera, Poseidon, Demeter, Ares, Hermes, Hephaestus, Aphrodite, Athena, Apollo, Artemis, Hestia.

The Twelve Olympians represented very human figures when compared to the Titans who came before them and those gods who came after, which were very much representations of concepts -- such as Helos, representing the sun, or Chronos, representing time. The great council of gods and goddesses lived on Olympus, which explains why Poseidon was one of the 12 while Hades was not, despite both of them being brothers to Zeus the king of the gods; Hades lived in the underworld.

It seemed that the lineup of the dozen gods and goddesses was a somewhat interchangeable, depending upon what Reed Chin, and in some cases what air a of Greek mythology, one was examining. For example Hercules, the half mortal son of Zeus, is frequently considered to be one of the 12.

Zeus, the father and King of the gods in the most powerful, held power over the sky and was look to as the arbiter of justice. His wife, Hear, was the Queen of the Gods and considered to be the goddess of women, encompassing both marriage and motherhood. Poseidon, Zeus's brother, was the master of the sea; and also, interestingly, horses.

The rest of the Twelve Olympians were all second-generation gods and goddesses, the children of the first generation. Certainly one of the most popular was Aphrodite, the Goddess of love and beauty. Apollo was the God of the sun, archery, and prophecy -- and he only of the Olympian gods whose Roman counterpart bore the same name.

When it was time for war the one God you want on your side was Ares, the God of war -- but more specifically the blood lust and frenzy of war. But those Greeks who wanted a blessing when hunting would beseech the Goddess of the Hunts, Artemis. While I Ares was the God of the passion of war generals would look to Athena, the Goddess of strategic warfare and wisdom. Of course once he did the arms and armor in order to wage war and that was where the God of blacksmiths, Hephaestus, came in. Wrapping up the Twelve Olympians was the speediest of the gods, Hermes, the God of swiftness and trade.

Very much influenced by Greek mythology was Roman mythology, which also had 12 gods. The name of the 12 Roman gods were: Jupiter, Juno, Neptune, Ceres, Mars, Mercury, Vulcan, Venus, Minerva, Apollo, Diana and Vesta.

Hercules, the Hero of the Greek Pantheon
Share Your Story, Join the Discussion or Seek Advice..
Olympic Hoax Chimeras that embroider Hellenic mythology Must have, of genes been concocted Through the alien biology Of astronauts who had landed On Olympus as deities And had not humbly unfolded That they were simply laities.
Boghos L. Artinian - 7-Jan-19 @ 11:27 AM
Title:
(never shown)
Firstname:
(never shown)
Surname:
(never shown)
Email:
(never shown)
Nickname:
(shown)
Comment:
Validate: